A person over the cliff at Studland yesterday saw many of the town's emergency services working together as well as Dorset & Somerset Air Ambulance and  Coastguard Rescue Helicopter 175. 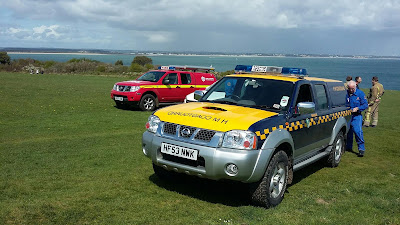 Our busy spell over Easter seems to have quietened down this week, but that doesn't mean the team hasn't been busy behind the scenes:

MONDAY:  Tidy up of kit and station after Sunday's incident.  Casualty came back to see us and to collect personal belongings.

TUESDAY: SO and DSO on station; tasked to investigate something in the bay.

WEDNESDAY: Visit from 20 members of Swanage NCI and a talk about our roles and joint working.

THURSDAY: Training night including some first aid work. New PPE had been delivered so this was unpacked and labelled.

FRIDAY: Our 4x4 off to the garage for maintenance.

So, as you'll see, it's not all blue lights and rescues - there's quite a lot goes on behind the scenes to keep the station ticking over. 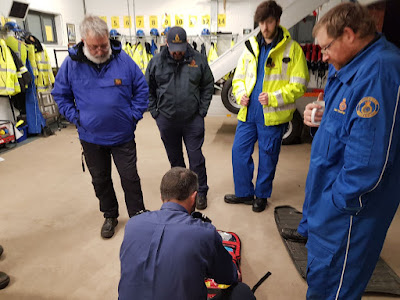 We blogged yesterday about a lone male who slipped on the Coast Path and broke his ankle.

Although he tried to phone for help, the casualty soon found out that there's no phone signal in the area, certainly not low down on the path itself.

With no phone signal and unable to walk, the casualty attracted the attention of another walker on the Coast Path and asked him to make a 999 call when he reached an area with reception.  The individual said he had no phone and so he took the casualty's own phone and set off to find some signal.

Over 24 hours later, and neither the individual nor the phone have been seen since.  The phone rings out when dialled, but isn't being answered.  We'd hate to think that this was a malicious act, but sad to say that at the moment it is being treated as theft and the Police are making enquiries.  We are not even sure the 999 call was ever made.


Fortunately, a second walker named John soon came by and also assisted.  He moved the casualty into a sheltered area and lent him his own coat before heading up the hill to call the emergency services himself.   He gave perfect directions and was waiting for us to show us the correct location once we RV'd at Verney Farm.  Our thanks go out to John who couldn't have been more helpful.

Do you know anything or have you heard of anyone who may have that phone?  Did anyone walking on the coast path near the Western Mile Markers see a discarded phone?  Please let us or Dorset Police know - we'd love to hear from you.
Posted by :- Occasional Blog at 19:21 No comments:

Broken Ankle on the Coast Path

The busy spell continues for the team who were tasked again on Sunday to attend to a walker who'd slipped and broken an ankle on the SW Coast Path directly south of Verney Farm.

Although initially tasked to assist the ambulance service, the team arrived well before the paramedics (the benefit of local knowledge and a 4x4 response vehicle) and so set about making the 60 year old male comfortable, monitoring his condition and administering first aid.

Waterlogged, muddy and slippy ground conditions coupled with the steepness of the cliffside at that location meant that extraction on foot was never a possibility and so Rescue Helicopter 175 was dispatched from Lee on Solent.  One option was to convey the casualty to hospital, but it was decided to fly him to the ambulance (which was parked on hard ground a mile or so away) where he could be attended to by the paramedics.


The team returned to the station to clean up some very muddy kit and to try to find temporary accommodation for Rummage, the man's dog who had been walking with him.  Sadly, there was no room for Rummage in the helicopter and so the team looked after her until a kind hearted member of the local community came forward and offered to take her in for the night.

Email ThisBlogThis!Share to TwitterShare to FacebookShare to Pinterest
Bloggies:- 175

Call to the beach

The team were tasked yesterday just after midday to a report of a person fallen off one of the wooden Groynes near to the former Ocean Bay.

On arrival a 12 year female was being treated by a paramedic but safely out of the water.

Whilst out dog walking with her family the young lady had slipped and cut her leg badly on the edge of the groyne.

The team supported South Western Ambulance and returned to the station just over an hour later.

The patrol was out tonight assisting Dorset Police in the Country Park area following a 'report of suspicious circumstances'.  The team undertook a brief search and assisted the police with location positioning and finally assisting the officers back to their vehicle at the end of the search. 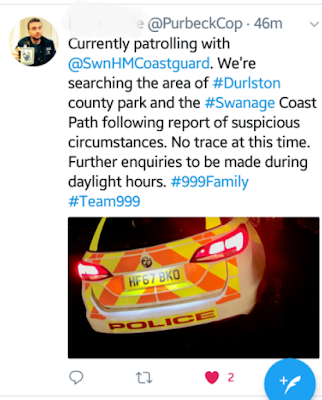 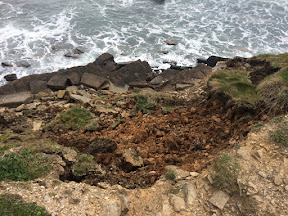 During yesterdays incident in Durlston Bay the team came across this very recent fall at Peveril Point.

Normally this would be the natural process all along the cliff line except this was one of the paths down on to the point.

Please do not use this route as the fall is still active and moving.

In a Coastal emergency 999 Coastguard

The Power of Social Media

The team was called out on Friday night following reports of a dog over the cliff at the Downs and of two people who it was thought may have been missing after going to look for it.

Whislt the team searched the base of the cliffs from Zig Zag back towards Peveril Point, the SO suggested putting a post on our Facebook page to see if anyone knew the persons over the cliff and whether they'd made it home safe and sound.

We issued a post from the scene and in a short space of time it had been shared 34 times and had reached over 3000 people. In approximately 10 minutes, the dog owner called the Ops Room having seen the post and confirmed that all was well and everyone accounted for, and the team duly stood down and returned to base.

The power of Social Media! 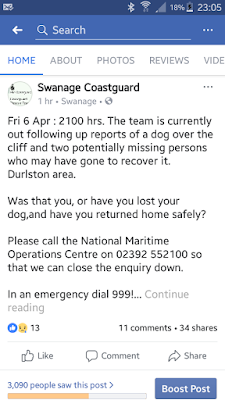 Not in Swanage, but a little further to the west earlier this week.  As our own post at the weekend showed, the cliffs have soaked up a lot of rain water recently and are becoming increasingly unstable. 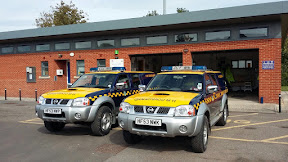 Late yesterday afternoon the team were tasked along with the St Albans Team to support the Police on the Downs with a concern for a male.

The Male was quickly located safely by the Police as the team arrived.

This afternoon the team were tasked to support some off duty lifeboat crew and a Coastguard who had stopped to help a collapsed male.

The incident by the Mowlem saw volunteers from both organisations work together and provide vital first aid until ambulance crews arrived. 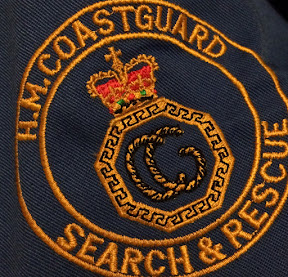 The team were tasked this morning just before 9am to a report of a car in the water near to the Mowlem.

Working with emergency services colleagues from South Western Ambulance , Dorset Police , Dorset and Wilts Fire and Rescue , Air Ambulance and RNLI, a car was located in the sea and a pedestrian was found to be seriously injured.

The team remained on scene for six hours to further support Dorset Police whilst they carried out a detailed search and removal of the car.

Dorset Police have since announced the male pedestrian sadly passed away; our thoughts are with the family.