The team has been back in action today assisting an elderly gentleman who'd lost his footing and taken a tumble whilst out walking the Coast Path, and who'd become faint as a result.

Arriving before the medical services, the team stabilised the gentleman and set about checking him over for any physical injuries as well as monitoring his general condition.

The team prepped the stretcher in readiness for a carry out of approx two thirds of a mile, but when it became apparent that the ambulance might be delayed, Rescue Helicopter 175 was despatched along with its winchman paramedic.   The winchman made further checks and although he could find nothing untoward, it was agreed that the gentleman should be assessed in the ambulance which had by now arrived at Anvil Point lighthouse.

Rather than physically carry the gentleman a fair distance over tricky terrain the helicopter made a single wheel 'light' landing on the sloping hillside sufficient to quickly load the stretcher aboard, and the casualty was then flown the short distance to the ambulance.


Our thanks go to Dorset Police who assisted us on scene today, and to the Dorset Police Rib which relayed our channel 0 VHF communications to the UK Coastguard from its waterborne position below us.

How long have Coastguards been volunteers

It's been a little busy this week again so sorry for the lack of Blogs.

Someone posted a picture of our truck and wrote - thank you to the volunteer Coastguards ........

A comment said " since when have Coastguards been volunteers" - well in Swanage, 1888 to be precise. ( yes that's over one hundred years!!!)

Although there are full time Coastguards in our operations centres and senior officers, the Rescue teams are ALL volunteers who all have full time jobs. 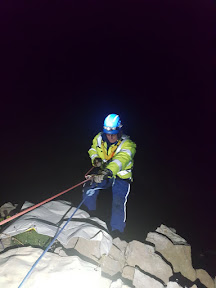 Rope training in the dark as Terry heads over the cliff. 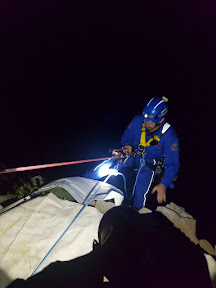 The team have again been called twice in the last two days with the weather being a factor.

On Monday the team were called to Studland and two paddleboarders being swept out to sea and yesterday a possible swimmer in trouble off Swanage beach.

Thankfully all involved got safely back ashore. 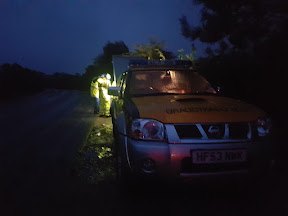 Last night just as the weather started to change the team along with Dorset Police carried out a search exercise at Studland.

With several objectives to be achieved and the rain the casualty was located quickly which enabled everyone to return to the station to dry off and have a mug of tea.

Sunday was a busy day for the team with four separate incidents (so far!)

The first was around 1am when the team was tasked to a female fallen over a cliff in Bournemouth - in this case the tasking was to support colleagues from Southbourne and Lymington but we were stood down when the lady was recovered by other means.

Next was a suspected piece of ordnance, discovered at Knoll Beach by the early morning patrol. Photographs were sent to EOD who examined them and who were content that the heavily corroded item was harmless.  The team marked the object up to avoid further calls and liaised with the landowner to arrange removal and disposal.

With the weather now worsening, the next task was back in Studland and to the asistance of a young lady who had twisted her knee badly when out walking near Old Harry.  Working with the NT rangers, first aid was given and the lady was stabilised and made comfortable before arrangements were made to recover her back to the village and from there to hospital.

Finally, whilst Swanage RNLI were out rough weather training, they noticed what looked to be a fresh cliff fall in the Tilly Whim area and the team was tasked to investigate from above.  Wearing full foul weather kit three CROs checked the area and coast path from the top, and after a further conversation with the lifeboat stood down when nothing could be found.

Meanwhile some of the newer members have spent a weekend training in Bournemouth.

That's 8 calls in the first ten days of September.....What will the rest of the month hold? 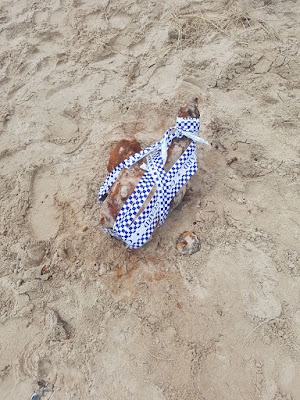 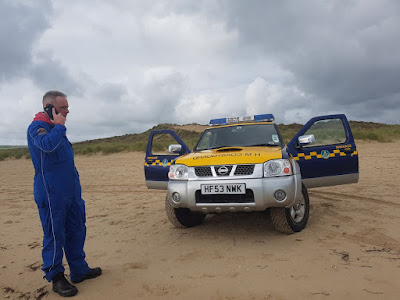 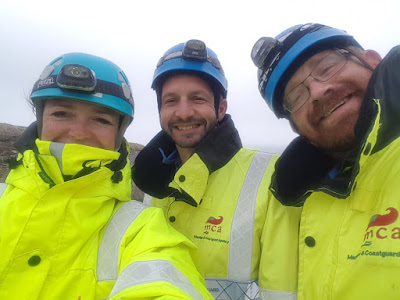 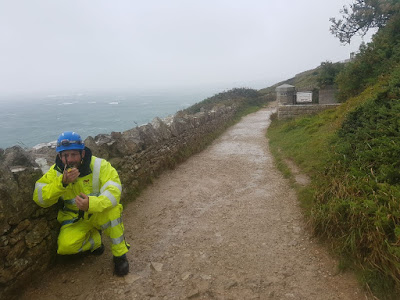 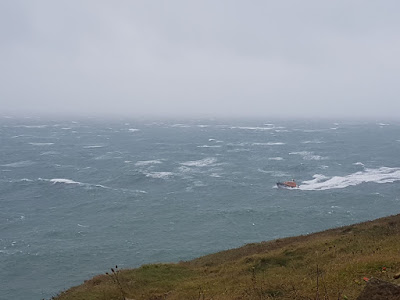 The team were tasked this afternoon to a mayday call regarding a light aircraft with engine trouble over Poole Harbour.

With information sketchy about whether the plane would land safely or not and the location that it might eventually come down, the full team was tasked ready to mount a coastal search if required and to carry out first aid and recovery as appropriate.  Colleagues from other emergency services were also tasked.

In the end, the pilot was able to make a controlled landing in a field near Fitzworth Point, adjacent to Wych Farm and a search was not required.

There were no injuries to either the pilot or his passenger. 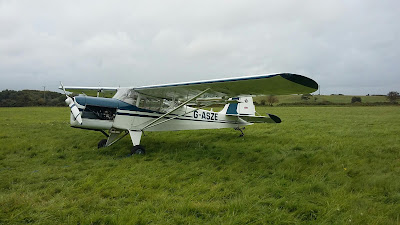 You may remember an incident earlier in the summer when we recovered 'Bella', the golden retriever from off the cliffs below the Downs at Swanage.
Although Bella's owners were very appreciative at the time, they decided to come back to Swanage last week and say thankyou properly and to meet the team.
We met at the CG Station and chatted for an hour or so over a cup of tea and the couple said they had seen us at an incident a couple of days earlier; like many, they hadn't realised that we are just volunteers who all have day jobs as well.
It was great to see the family all back together with both their dogs safe and sound and our thanks go out to them for coming to see us and for their kindness.

Naturally, we couldn't miss out on the opportunity for a quick photo for the album! 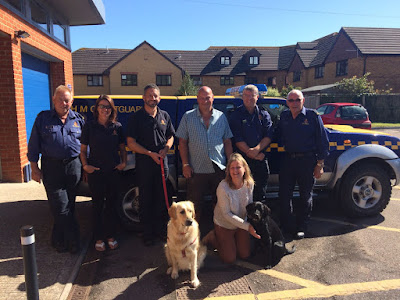