The team was back in action this morning at the request of Dorset Police who had concerns for the welfare of two climbers not seen or heard from since Monday.

The climbers' car was located at Durlston Country Park and so a search area was drawn up between the Eastern and Western mile markers.  Some personal equipment was soon located in the Boulder Ruckle area and so whilst some team members made for that spot, others took positions further along the cliffs where they were able to get 'eyes on' the climbs in that area.

Before long the climbers were sighted slowly making their up the Marmolata Buttress climb and were met by Coastguards at the top.

Although cold, the pair were fine despite having spent the night in the elements and they were soon on their way back to their car.

It seems that the climbing routes were busy yesterday so they had abseiled in using someone else's rope which was already in place.  By the time the pair were ready to go home, the other abseil rope had been removed from above and the climbers found themselves tired, cold and stuck at the bottom of the cliff.  Rather than try to risk climbing out last night the experienced pair set off this morning using gear to set up a safety line as they progressed in the absence of a rope from above.
Once the team was happy that the climbers were safe and well, we stood down and returned to station.
.

Our October exercise took place on Sunday morning and involved a joint session with Dorset & Wiltshire Fire & Rescue's Technical Rescue Team from Poole.  We were also joined by our colleagues from Southbourne Coastguard (our nearest rope rescue neighbours to the East) and together the teams carried out rope rescue recovery of a dummy 'casualty' from the cliffs at Anvil Point.
Fire & Rescue have similar systems to ours, but not totally the same, and the idea behind the exercise was to become familiar with each other's methods, systems and equipment for times of joint emergency working.
A really useful morning with some bright autumn sun, and plenty of wind to blow the cobwebs away! 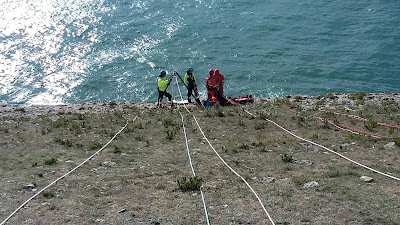 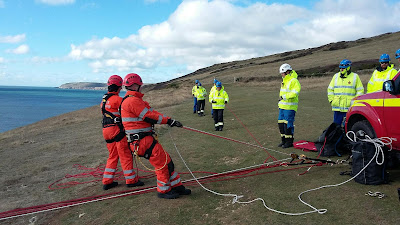 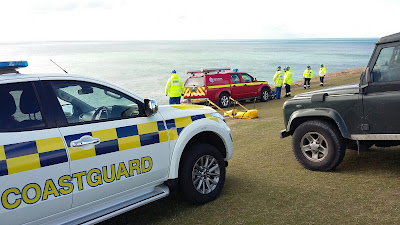 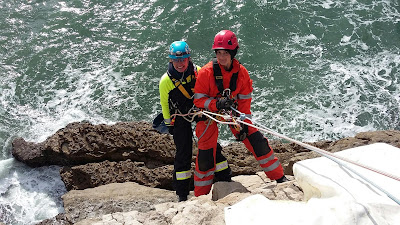 Coastguard teams , RNLI crews , Ambulance personnel , Police and the Rescue helicopter from Lee on Solent were tasked to near the Western Mile Markers to a report of a person fallen from the cliff.

A group of climbers had called 999 Coastguard just as they were about to start a climb.

On arrival a male was located at the base of the cliff but sadly confirmed deceased.

Coastguard Rescue Officers were lowered down the cliff to assist lifeboat crew members in the difficult extraction and hand over to the Police.

Volunteering for the community 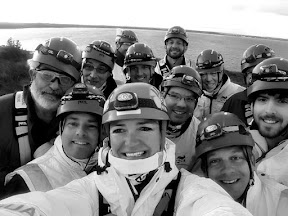 Coastguard Rescue Officers are all volunteers who when called respond to emergencies.

Whilst the Coastguard Service is a Government Agency the feet on the ground at about 300 stations around the country including Swanage are all volunteers.

In our team we have two trainers , a business advisor , a painter , a night porter, teacher , two business owners , a plant operator , a university student and youth leader. Some would say a big mix of skills but that’s what makes a team.

So it was nice this week to receive letters from two people involved in incidents during the last month thanking the teams for their service especially one for a medical emergency who is recovering well.

Both St Albans and Swanage Coastguard teams were tasked to St Albans head this afternoon to a 66 year old having a medical episode.

First aid was provided until an ambulance crew arrived. The Coastguard helicopter Rescue 175 had been tasked and landed nearby to evacuate the lady to hospital. 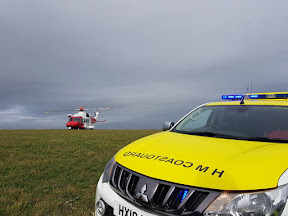 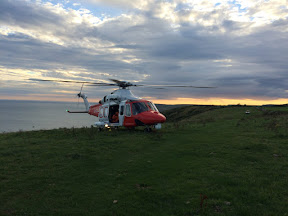 During the search on Sunday , Solent Coastguard took several 999 calls reporting a person in the water at Winspit.

Search assets were diverted and found two divers in the water struggling in the current.

The pair were airlifted by the Coastguard rescue helicopter and landed with the St Albans Coastguard team at St Albans Head.

Neither divers required medical treatment and were returned to their car near spyway barn.

The body of a man and his kayak have been recovered from the water this afternoon 22 nautical miles south of Tyneham.

On Sunday 7 October 2018 following an extensive search coordinated by HM Coastguard, the man – believed to be 60-year-old Alistair Collier – was located in the water alongside his kayak by the coastguard fixed wing aircraft and recovered from the water by HMS Tyne and transferred to Poole Hospital by coastguard helicopter.

The search began yesterday afternoon, Saturday 6 October 2018, when race organisers raised the alarm after the man failed to finish a race, which was running between Knoll Beach and Swanage Pier.

An extensive search was carried out yesterday, overnight and throughout today with RNLI lifeboats from Swanage, Poole, Yarmouth, Mudeford, Bembridge and Weymouth, along with Coastguard Rescue Teams from Swanage, St Albans, Kimmeridge and Lulworth and Dorset Police. Coastguard helicopters from Lee-on-Solent, St Athan and Newquay searched overnight and the coastguard fixed wing aircraft was brought in this morning as the search area widened.

Formal identification has not yet taken place, but Alistair’s family have been informed and the coroner has been notified.

We would like to thank everyone who assisted in the search and who has shared the appeal. 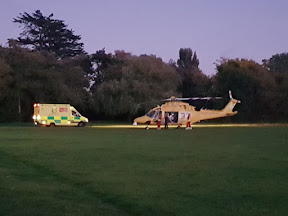 The team assisted the Dorset and Somerset air ambulance this evening at King George’s field.

The crew required access to the field to allow the ambulance near the aircraft.

The team opened up the barriers and assisted with the casualty transfer before securing the field to allow the helicopter to take off.

Early morning call to the pier

The team were called just after 7 am to meet a yacht with a female on board suffering from chest pains.

On arrival at the pier the team provided first aid until the ambulance crew arrived. Having assessed the casualty a decision was made to take her to hospital for further treatment.

The team assisted with the transfer from yacht to pier and then to the ambulance. 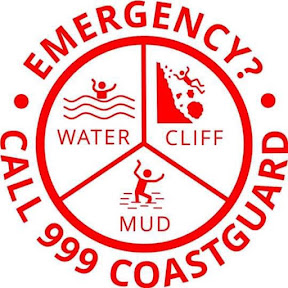