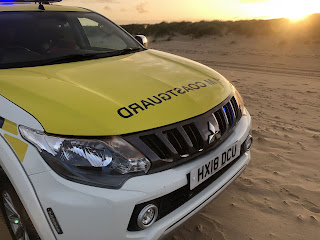 A large scale search was launched last night for a missing male which involved Police, Coastguard , RNLI lifeboats, NPAS and many volunteers.

With light fading Coastguards from Swanage and St Albans  deployed to the beach front and an area from Peveril Point to Sheps Hollow along with Ballard Down. Both Swanage RNLI lifeboats launched and conducted shore  line searches with Police searching the town.   The Police helicopter was also deployed and covered areas of the town.

Swanage RNLI Inshore lifeboat spotted the missing male at Ballard point and safely recovered him in the boat and brought him back to the boat park where Police ,  Coastguards and Ambulance were waiting.

We would like to thank everyone involved in locating and safely finding the male.
Posted by :- Swanage Coastguard at 08:51 No comments:

Well, maybe not power exactly, but local knowledge is certainly very useful when we get tasked to incidents along the Coastline between Durlston and Dancing Ledge.

As you may know, there isn't a nice tarmacked road along the cliff top, so we have to make a call as how best to reach some of the more popular climbing locations.


In the worst case we can park at the lighthouse and walk kit in, but there also routes from Swanage via the Old Dump Lane, via Belle Vue Farm at the top of Benlease Way, via Gully and Verney Farm and via Langton and Spyway Barn.

One of our August training sessions saw us reminding ourselves of the various routes and access points and driving those that were passable.  There are some 4x4 routes along the top which we drove as well to refresh the memory and check gate locks etc.


All in all a very useful session, and the follow up session later in the month was to see the same views from the water, and to get a feel for the cliffs from a different angle.  More on that another time.
Posted by :- Occasional Blog at 09:55 No comments: 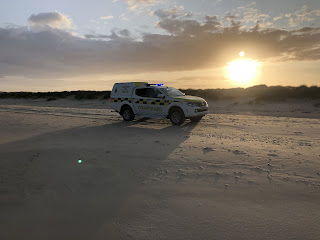 As the sun sets on another bank holiday weekend , the team reflects on six incidents over the three days.

On Saturday the team were called to Studland to assist the ambulance service with a carry of a patient from the beach.  In the afternoon they were again called out to Durlston for a male who had fallen from a step over a wall twisting or breaking his ankle.

Sunday saw two yachts collide off the beach at Swanage and the patrol monitor the situation whilst the inshore lifeboat went to assist.
After that the team monitored a power boat with a mooring rope caught around its propeller until the crew managed to untwist it.

Monday saw the patrol tasked to Middle Beach for a 5 year old missing and last seen in the water. The full team were sent along with both Poole RNLI lifeboats. Immediate searches were carried out by the team and National Trust staff who located the child safe and well some distance up the beach.
The patrol were then flagged down at Knoll beach by a male who had been stung in the mouth by a wasp.  Immediate first aid was given with the males airway monitored and treatment given. Thankfully after 30 minutes the pain had reduced and with no further swelling the team resumed.

Keep your children safe on the beach 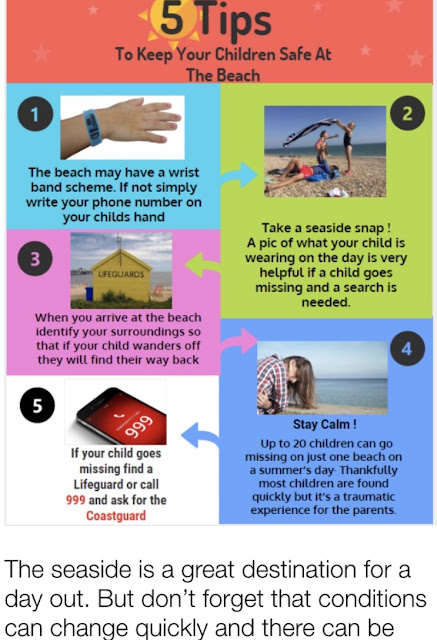 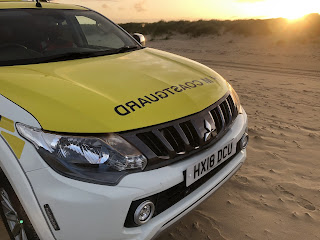 The team were called out on Monday to a report of a female and child being blown out to sea on an inflatable at Studland.  The team arrived along with the Poole RNLI Lifeboat.

The female and child had managed to get ashore , cold but otherwise not injured but was check by a passing off duty doctor.

The situation had developed when the off shore wind pushed the pair out.

On Wednesday the team were tasked to Durlston to assist the Ambulance service with a collapsed male near to the globe.

In an coastal emergency call 999.
Posted by :- Swanage Coastguard at 21:03 No comments:

Sunday saw a busy afternoon for the team , the first call was during the teams regular weekend patrol when they were tasked to the coast path to Old Harry Rocks.

A 999 call to both South Western Ambulance and Coastguard reporting a person taken ill had the patrol followed up by the rest of the team soon arrive. Assisting the paramedics the male was taken back to the ambulance for treatment and later to hospital.

Having just returned to Swanage , the patrol were made aware of the Poole RNLI Lifeboat tasking  to a kayaker in the water off Shell Bay Marine.  The team made for the area and liaised with the lifeboat crew who had located both the male and his missing kayak which he had become separated from.

The male was checked over and advised to get checked at hospital due to being in the water for sometime.  Some safety advice was also given about equipment to carry - keeping your phone in a water proof bag for example.  Thankfully the male had been wearing a life jacket which was vital in keeping him afloat until a passing boat spotted him and the arrival of the lifeboat.

Just before 7pm the team were called to Knoll beach and a yacht aground.  Due to the location and wind , Poole Lifeboat was requested whilst the team provided support. 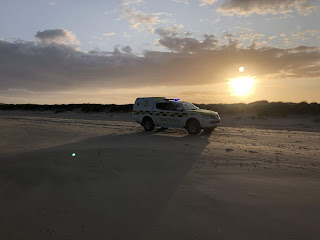 The team stood by and deployed two water technicians to assist the solo sailor on his yacht. 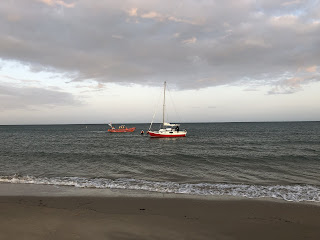 The yacht had struggled in strong winds before grounding , thankfully no one  was injured.

With the tide rising and some pushing and a tow from the lifeboat the vessel was freed and escorted by the lifeboat to a safe mooring.

In a maritime emergency call 999 or VHF Channel 16 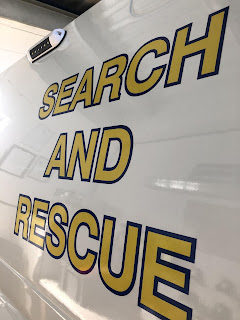 Two incidents on Saturday to assist our colleagues at South Western Ambulance.

The first was as the patrol arrived at Knoll Beach Studland where the team assisted an eight year old with a broken arm.   Working with the National Trust the young man was taken to Poole Hospital.

Later on just before 7pm the team were tasked to Shell Bay and an 11 year old who had dislocated his knee.  Despite being very brave the young man required pain relief which was provided by the ambulance crew before the knee was put back in place.  The team then stretchered him to the ambulance and a trip to Dorchester hosiptal and an X-ray. 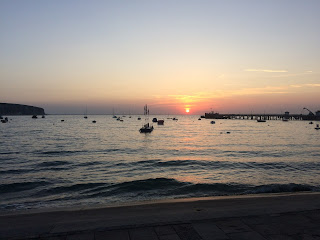 With another unseasonal wet night with strong winds, a reminder of the good weather a few weeks ago.

If you are heading out over the weekend, don’t forget to check the weather forecast and tides.
Posted by :- Swanage Coastguard at 22:29 No comments:

The predicted weather has arrived and its not the normal weather we expect in August.

Whilst there are plenty of warnings and cancellation of events, they are done to protect people and not to spoil peoples fun or activities.

Please consider if your activity is appropriate in these unseasonable conditions.

Email ThisBlogThis!Share to TwitterShare to FacebookShare to Pinterest
Bloggies:- Weather 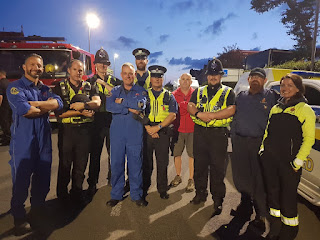 Sorry for the late post , but that's down to operational call out.

Another excellent and fun carnival week done and many thanks to the members of the carnival committee and all those behind the scenes for making it a great week.

The weather might have got the better of a few events but the air shows were good and lets hope lots of money for local causes was raised.