Some one forgot to tell us it was his birthday.

Happy Birthday Rog. From all the team

It's half term and school teacher Mr Hobbs, or Duncan as we call him, has a week off.

Well he doesn't, as he's a volunteer Coastguard Rescue Officer....

During the rescue op yesterday the helicopter landed to save fuel and Duncan was tasked to secure the landing zone - so a quick photo op for the blog.

Just after midday, the Coastguard team along with both Swanage RNLI lifeboats and Rescue 106 were tasked to near Anvil Point.
The report was of a climber in difficulties and requesting urgent assistance.

The climber was on a climb below this photo but shows the area.

Rescue 106 assessing the scene. The Coastguard team set up the cliff equipment to provide cliff top safety, meanwhile the lifeboat crew had managed to get ashore and started to treat the climber.

The helicopter crew winched the injured climber to Poole Hospital.

It appears a rock gave way which made the climber swing into a boulder injuring his chest but thankfully his safety equipment stopped him from hitting the ledge below.

Who makes a good Coastguard?

When the cubs visited us earlier in the week, we explained to them that we were all volunteers and all had 'day jobs' as well as Coastguard.
We then gave a random selecton of jobs, and asked the boys to tell us whether that person would make a good coastguard or not.  Here are the results:
Interesting results, and of course the survey wasnt actually random because these are the occupations of the 13 current serving members of the team.   The important points are a reasonable level of physical fitness, an ability to work as a part of a team, often in challenging conditions and a willingness to learn and 'buy in' to the team ethos.  Oh, and to be able to give up some regular free time to help.

Langton cubs came to visit the station last night to have a look round and see what we do.


It was great to see so many enthusiastic faces and to get so many interesting questions.


After a Q+A session we showed them the equipment we use and we even managed to get through the evening without the truck sirens "accidentally" being set off.


Its always rewarding to do talks like this, and who knows, we may have even inspired some coasties of the future.
Posted by :- Occasional Blog at 17:31 No comments: 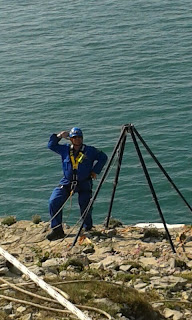 A lovely shot of Roger during training at Anvil Point this morning.
The piece of kit next to him is the quadpod which gives some height to the ropes to assist getting the technician over the cliff edge.
You can also make out the edge protection material which is laid over the edge of the cliff to stop the ropes chafing on the rocks.
Posted by :- Occasional Blog at 13:12 No comments:

After the winter storms last year, many warning signs went up.

Over time they were ignored and didn't tell the full story of the land slips.

Many partner agencies have been working together for many months this includes LiCCo, Swanage and Dorset Coastal Forums, Swanage Town Council, Envirnoment Agency and the Coastguard on different parts of either the clear up or education.

This new signs - one at the bull and boat (ocean bay to many) Burlington Chine and a further one to be added at Sheps Hollow tell the story from 2012 especially the dangers.

Please take time to have a read if you are passing.

The initial response team were requested to look after the outer cordon having been briefed by the fire service.

The team have been out today assisting the Police and Fire Services in maintaining a safety cordon in Shore Road following the discovery of some live ordnance.

The World War II SIP ("self igniting phosphorous") grenades were discovered by workmen on the seafront stabilisation works who unwittingly set off two grenades when they struck them with their digger bucket.  The fire service were called to deal with the resulting fire and smoke, and then the EOD (Explosive Ordnance Disposal) specialists from the Army at Tidworth were called to deal with the rest of the find.

In all, 6 broken devices and 18 intact ones were removed and placed in a skip where a controlled explosion took place, igniting the evening sky with a ball of flame and filling the bay with smoke.

According to Wikipedia (we had a lot of time to kill while maintaining the cordon), the SIP grenades were issued to the Home Guard as a form of self defence and it is likely they were stored in or near the bunker that was also recently removed from the hillside.  Wikipedia goes on to say "The perfected list of ingredients was yellow phosphorus, benzene, water and a two inch strip of raw rubber; all in a half-pint bottle sealed with a crown stopper. Over time, the rubber would slowly dissolve making the contents slightly sticky and the mixture would separate into two layers – this was intentional and the grenade should not be shaken to mix the layers as this would only delay ignition. When thrown against a hard surface, the glass would shatter and the contents would instantly ignite liberating choking fumes of phosphorus pentoxide and sulphur dioxide as well as producing a great deal of heat"
﻿﻿﻿﻿﻿﻿
Posted by :- Occasional Blog at 23:15 No comments:

Email ThisBlogThis!Share to TwitterShare to FacebookShare to Pinterest
Bloggies:- Brian

Why are pirates called pirates....


Nick likes a fancy dress.. he wears one every Saturday night ;-)

However, tonight it's actually a proper fancy dress night...well I hope so, he's meant to be HMCoastguard, not Captain of The Black Pig!

Email ThisBlogThis!Share to TwitterShare to FacebookShare to Pinterest
Bloggies:- Nick 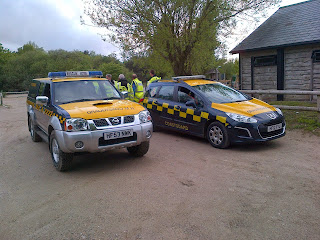 Last night found us at Studland Beach preparing and implementing a search plan for a missing person.
Normally, we'd go through a process that takes into account the last known sighting, a persons intentions, their age, physical condition, mental state etc when deciding where to concentrate the search. Last night there was another overriding factor to consider....how far from his car would our sector manager drag a life sized bright orange dummy in an attempt to 'hide' it? Not far, we thought, and so we concentrated the search near to the road and lo and behold, the casualty was soon located and recovered.
Posted by :- Occasional Blog at 16:01 No comments:

Email ThisBlogThis!Share to TwitterShare to FacebookShare to Pinterest
Bloggies:- Training

The Purbeck Marathon team will hold an Open Night on Thursday the 5th June 2014 at the Royal British Legion in Corfe Castle. Doors will be open at 7pm for a 7.30pm start.

There will be a (very) short briefing about The Purbeck Marathon, the current structure and goals, followed by an opportunity to meet the committee, volunteer to help or just to learn more. The open night is open to members of the public, Running Clubs, Organisations, Businesses and Charities to learn more about the marathon, what they do and how you can become involved in The Purbeck Marathon which was rated No.1 Marathon By Runners World. 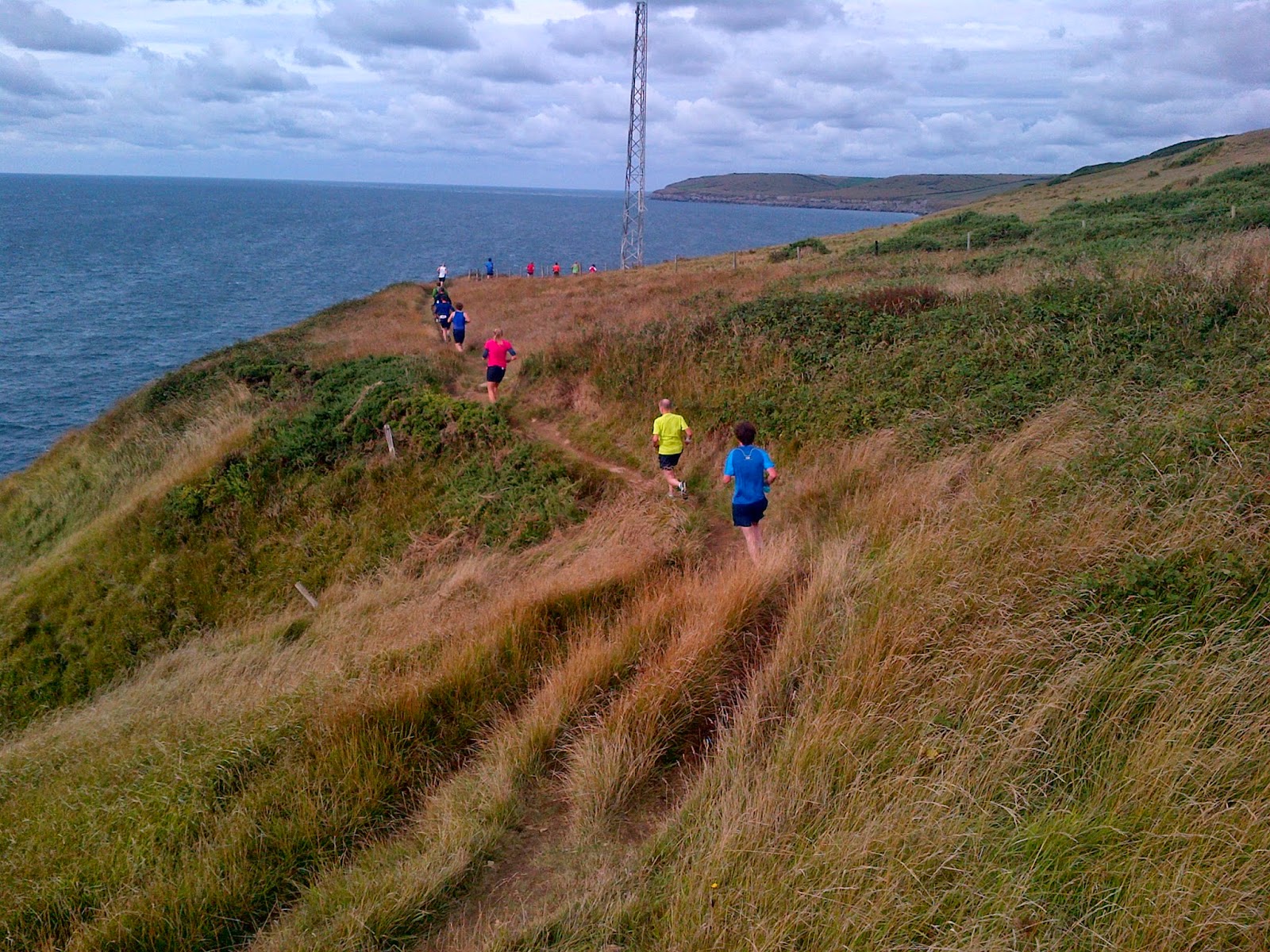 We had a report of some more cliff falls today so sent a team member on a walk.

This is what was found.

The second incident of the day was quite serious due to the number of people it involved.

Local dive boat Skua off Old Harry called a mayday when a outrigger canoe was spotted in difficulty. With 6 people on board the craft was in danger of sinking and those people ending up in the water.

Two other canoes were also struggling in the tide nearby.

Portland Coastguard immediately requested the launch of both RNLI lifeboats from Swanage and re directed the patrol.

Both Swanage lifeboats alongside the sinking out rigger canoes.

The lifeboats made for Studland where they dropped them on the beach, the Coastguard patrol ensured all were ok and gave some safety advice.

The sinking craft was swamped in the strong ebb tide off Old Harry.

Email ThisBlogThis!Share to TwitterShare to FacebookShare to Pinterest
Bloggies:- Incidents

The Swanage Coastguard Team, St Albans Coastguard team and Swanage RNLI inshore lifeboat were tasked this morning to west of Anvil Point after a dog was reported fallen from cliffs.

On arrival the dog was reported in the water near to some climbers, the Inshore Lifeboat was soon on scene and managed to get the dog aboard their boat.

The lifeboat returned to Swanage and reunited the dog with its owner.

Pippa back at Durlston after her ordeal of falling off the cliffs.

We have heard tonight that nothing is broken following a visit to the vets.

Think where you park

Thinking of visiting the coast this weekend?

Please consider where you park, blocking a gate or entrance could delay the emergency services.